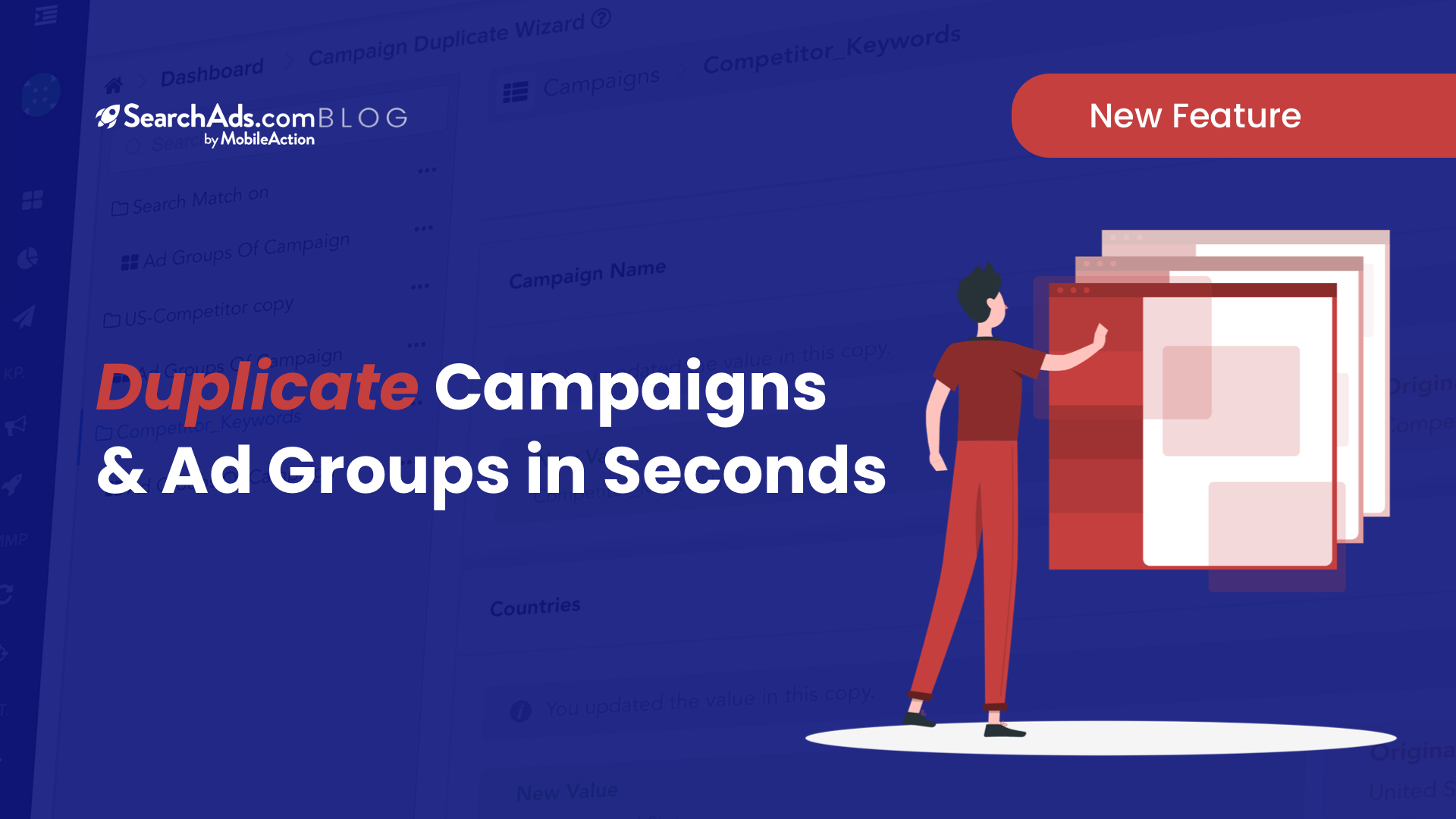 As User Acquisition Managers dealing with multiple campaigns and ad groups in different storefronts, it is a must to make new experiments to increase your ROAS. Yet, when you’d like to run the same keywords, the ad group, or the campaign as a whole to another storefront, it becomes such a pain. You have to set each campaign and ad group from scratch, and arrange all other variables one by one manually. The new Multiple Campaign & Ad Group Duplication feature is developed to ease this process.

Our latest feature is a real lifesaver at this point. It allows you to duplicate multiple campaigns & ad groups to multiple storefronts with a few clicks, in a matter of minutes. You can include all the variables within the campaign/ad groups such as the budgets, bids, creative sets, all the keywords and negative keywords in your new, duplicated campaign. Also in the ad group duplication process; you can set up Search Match settings, ad scheduling, audience type such as device targetings, customer type, demographics and locations. Then you can duplicate your campaigns & ad groups to different storefronts with the adjustments.

Suppose you have a fitness app running ads in all English speaking countries. You have the Generic, Competitor, and Brand campaigns already running in the US storefront, and they perform quite well. Knowing this, for these 3 different campaigns and all the variables within, you wish to run the same campaigns in the UK, Canada, and Australia storefronts.

The new Multiple Campaign & Ad Group Duplication feature saves hours. For 3 different campaigns and 12 ad groups & 10K keywords within, you can make this duplication to 3 other storefronts in under 20 minutes approximately, which would take 3-4 hours if you duplicated them one by one.

Then, from the “Actions” dropdown menu, choose the “Duplicate Campaign”.

If your campaign has ad groups within, you can duplicate or remove all of them as well on the ad group level. Enter the new ad group’s name, the default CPT Bid, the statue (active/passive), and choose the values you want to include within this ad group such as the keywords, negative keywords, and creative sets. You have the flexibility to duplicate all of them, with just one click. If you want to edit your ad group in more detail, you can do so by selecting Advanced Settings.

Here are the options you have in Advanced Settings:

When you are done, to see the overall changes you have completed, click on “Review” and see how your campaign/ad group will seem after duplicating.

After you follow these steps for all the campaigns and ad groups you selected (and you see them in the column on the left), click on “Duplicate” on the down right corner, and you are all set!

Main Benefits of This Feature:

We would be more than happy to guide you through this and many other new features, and show you how to duplicate your campaigns quickly in a few steps. For best practices in Apple Search Ads and more, schedule a demo with us to find out what we can do together to leverage your apps’ performance in ASA.

Overcoming Data Discrepancies – Learn the reasons behind it