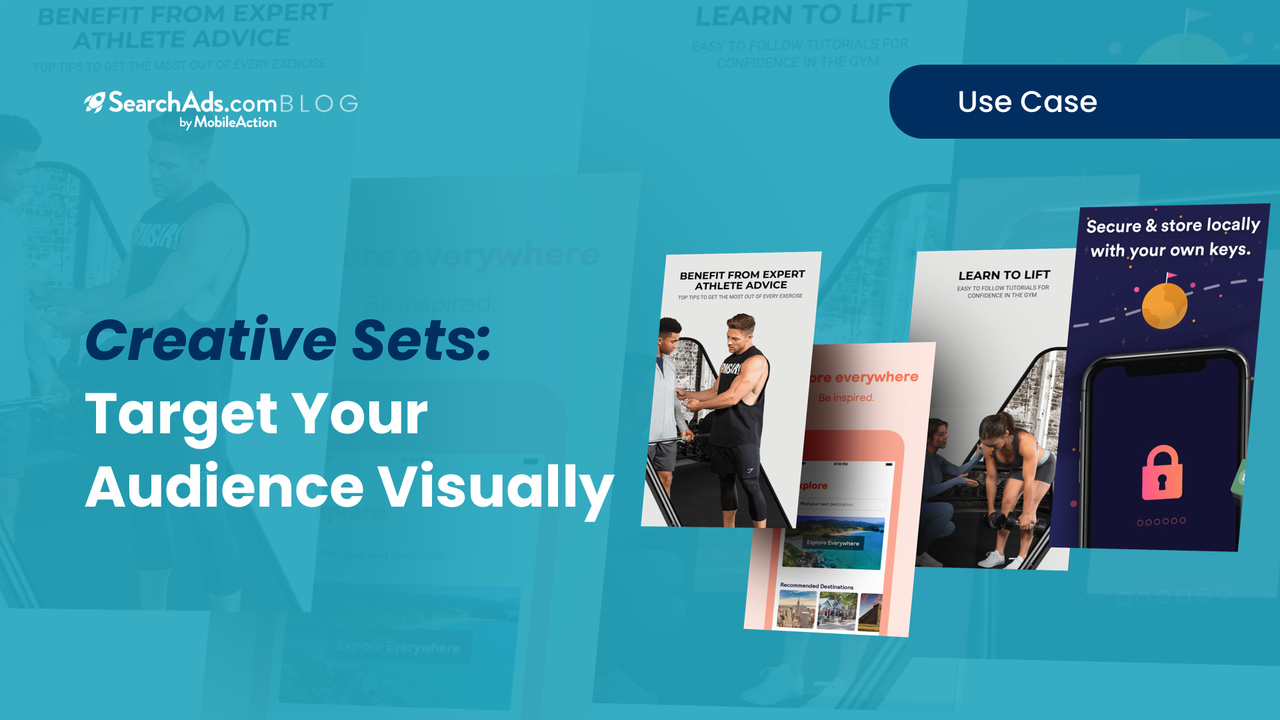 There are many things you need to do to boost your app in Apple Search Ads. You have created the best performing, well-structured campaigns, and made a great effort to improve your app. But, there is more than these you can do to get better in Apple Search Ads, and one of them is Creative Sets.

Let’s say you are an agency or a User Acquisition Manager wanting to receive more taps for your apps. Assume that you have a multipurpose app and you want to highlight the relevant feature to the right audience. Or say you have an app that has one feature presenting two value propositions.

Apple Search Ads shows 3 vertical or 1 landscape photos on ads. Apple chooses the first 3 visuals from all of the screenshots you uploaded and sets them as default to show the audience on the ad. But what if you choose these 3 photos to be shown to the audience in the ad yourself?  This is called “creative sets”, and has a tremendous potential to receive more taps with less effort on your ad if you use it efficiently. Let’s see the niceties of creative sets.

What is the benefit of using creative sets?

Draw the attention of the target audience by directly addressing them.

Say you have an app that addresses both men and women differently, like the Gymshark app.

Gymshark is a workout app and includes both men and women exercises differently, by athletes from different genders. So this is a great app that has two separate targets. You can see Gymshark’s first 4 visuals as follows:

Apple arranges a default set of visuals chosen from these 10 total visuals: 3 vertical and 1 landscape. Let’s say a female potential user looks for an app that is oriented for women. The default may include a mix of screenshots that address both men and women, which may cause attention loss for that user and she may not be impressed as much when she sees the visuals of men. She may not tap on your app thinking it is not what she exactly looks for.

With the creative sets, you can choose your own set of screenshots oriented for each target you address. In other words, you can choose 3 visuals for your ad group dedicated only to women and another 3 pictures that will attract the men.

Let’s say you will choose the pictures 5th, 8th, and 9th from the total visuals that will draw the attention of men:

Let’s say you will choose another 3 visuals for the ad group you prepared for women; 3rd, 6th, and 9th:

When the potential users search for the keywords in your ad group that you created for women, the set of pictures you choose will be shown to the target audience, “women” directly. Women audiences that see the pictures directed specifically to them will think that your app is a great fit for their needs, and thus decide to tap on your app.

Just compare the tap rate when you use your creative set and the default set of Apple, and if you detect that the default one underperforms, go on using your own creative set.

Highlight one feature of your app to the user looking for that specific feature.

Say you have a multipurpose app, like Skyscanner. On Skyscanner, you can get sightseeing recommendations and explore new places to visit and also book flights, hotels, and rent cars.

Why would you show all the features you have even if it is not related to what the user is looking for instead of showing the exact need of the potential user?

Let’s say you are the User Acquisition Manager of Skyscanner and you created an ad group consisting of booking-related generic keywords such as “book hotel, book flight, rent a car, accommodation” etc. You can arrange a creative set to be shown when these keywords are searched. The potential user searching for these keywords will most likely be looking for an app in which they can book flights, hotels, and rent cars, etc., and when they see your creative set directly targeted to their need, they will tap on your app. You can test this creative set to the default one and continue with the best performing one.

And let’s say you have another ad group which you created to promote another feature of the Skyscanner, the sightseeing recommendations and discovering new tourist attractions. Your ad group for this consists of traveling related generic keywords such as “travel adviser, travel guide, vacation finder, vacation tips”. When the potential user searches for the keywords under this ad group, they will be shown the creative set you arranged for this ad group. The users will think this is what they are looking for, and so tap on your app.

So, create a set of 3 screenshots that present the specific feature of your app clearly. In these examples, Skyscanner can choose 3 pictures from all their visuals showing the booking interface of your app and another 3 for the travel recommendations.

If you spot the targeted feature of your app to the right audience in an intriguing way, your app is likely to receive more taps. Again, you can compare the default set and your creative set and choose the most profitable one and discard the one underperforms.

Let’s see another example. Say you have an app that has one feature but multiple value propositions. And assume that it is an app that you can track your cryptocurrency, like the BRD Bitcoin Wallet app. BRD Bitcoin Wallet has two value propositions: They are safe and practical since they collect different currencies in a single place. They have 7 screenshots in total, the first 4 of which are as follows:

Similar to the previous examples, BRD Bitcoin Wallet can choose the visuals that best represent their specific value proposition to the user looking for it. They can choose these 3 to demonstrate how safe their app is:

And arrange these 3 as their creative set to show how practical they are:

Visuals are very powerful in attracting users in the first place, but preparing your visuals are not all you can do with them. If you create intriguing visuals and more importantly, choose and present the ones that specifically demonstrate what your target audience is looking for, your app is more likely to receive more taps. As said before, compare the tap rate with the default set and your own creative set, and choose the one that performs better for your ad group.

PLUS: Duplicate Your Creative Sets

If you detect that the creative set you arranged performs better than the default one and you managed to increase your taps, you can simply duplicate that creative set to another ad group with SearchAds.com “duplicate creative set” feature. Find the best performing creative set and duplicate it easily with a few clicks in your other related ad groups in your campaign, or duplicate it even in other storefronts to give it a try, and save time!

If you are open to learning more about how creative sets work and what else you can do to get more taps for your app, book a product tour, and take a look at our success stories to discover how SearhcAds.com’s other features serve effectively and profitably for SearchAds.com users.

Mehmet Can Cavas,
Wed Jan 20 2021
How to run a Discovery Campaign on Apple Search Ads