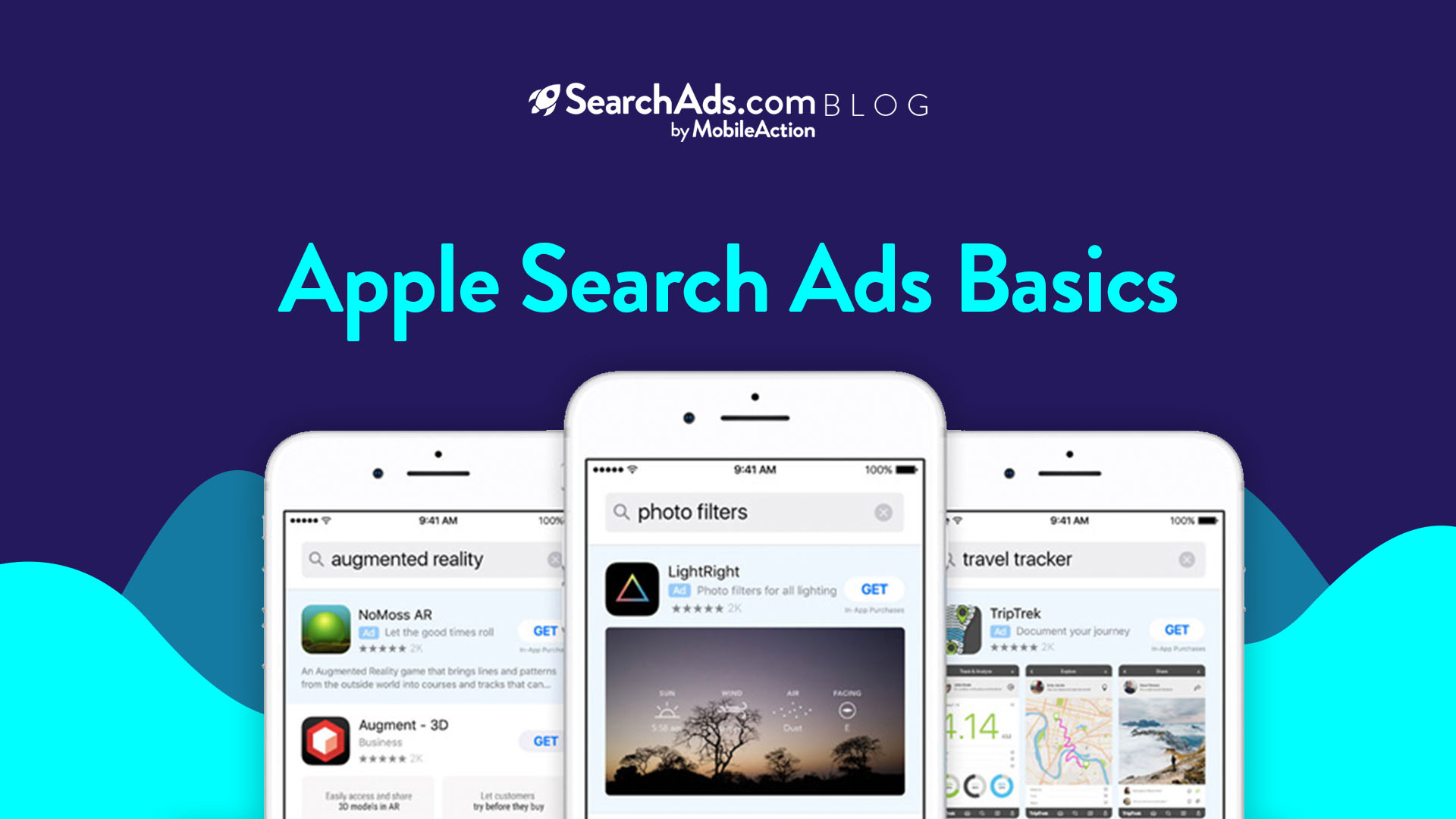 Almost one year has passed since Apple launched its groundbreaking product; Apple Search Ads. At first, it was viewed as a reskinned version of Google AdWords but as Search Ads became increasingly popular we all realized that it is something entirely different.

Before you get even more confused let’s have a look at what is Search Ads, how does it work and what do you need to know to get started with Apple Search Ads.

What is Apple Search Ads?

Apple Search Ads is a form of advertising created by Apple that allows users to directly advertise in the App Store. Basically, Apple shows your ad at the top of the search results when someone searches for a keyword you are running Search Ads on.

Unlike other forms of mobile advertising, in Apple Search Ads users do not have the option to create custom ad banners. As for now, your ad is basically how your app would look on search results with the only difference being a small icon stating that it is an ad.

That is why your meta data and creatives play a critical role in running a successful Search Ads Campaign.

Making sure that your creatives and meta data are optimized will most definitely make it easier to get your ROI from Search Ads.

Apple Search Ads works based on a second price auction system (more on that shortly) where users bid on keywords and the winner gets their ads displayed on the App Store.

But how does Apple decide to display your ad?

There are two important points that Apple looks at when deciding to display your ad.

Your relevancy score and your maximum CPT (Cost-per-Tap) bid.

So, let’s have a look at what exactly is your relevancy score.

Apple, when announcing Search Ads stated that they value customer experience highly so they wanted to avoid showing irrelevant ads to their users by introducing relevancy score.

Basically, when you start running Search Ads on keywords Apple looks at your metadata (your app title, description and keyword field) and decides whether that keyword is relevant to your app or not. If it is not, your ads won’t even enter the second price auction Apple runs that looks at your max. CPT bid. That way, Apple aims to prevent big companies to dominate every search result and give smaller developers a chance to get discovered with Search Ads.

Relevancy is the first step to ensure your ads will be displayed.

The second step to ensure your ads are displayed goes through the max. CPT bid.

But before continuing with the max. CPT bid, let’s have a look at how the second price auction works.

When two apps are competing for an ad display, Apple looks at their maximum bid and decides who the winner is. However, the winner does not pay the maximum bid they are willing to pay but the amount they pay is determined by their closest competitor.

For example, let’s say that the maximum amount you are willing to pay is $6 and your competitor is willing to pay at most $4. In this case, when you win the auction you won’t be paying $6 but you will be paying $4+1 cent because it is a second price auction.

Under the light of that let’s move on to max. CPT. So, Apple has decided to run a CPT method on the ads. That means that you will only be paying money when someone taps on your ad. So winning the auction doesn’t mean you are spending that money right away.

Provided that you have ensured that your campaigns are relevant to your app, Apple looks at your max. CPT bid to decide if they will display your ad or not. As explained above, your max. CPT bid is the maximum amount you are willing to pay for a tap on that keyword.

On a basic level, this is how Apple operates Search Ads. Because Apple runs a second price auction and has decided to use a Cost-per-Tap method it is one of the cheapest ways of advertising your app. But what else? What other reasons are there to run Search Ads?

Let’s have a look at the pros & cons of Search Ads and you can see why you should most definitely run Search Ads at least on a small scale:

However, as with everything else in life, Apple Search Ads also has its cons. However, they are fewer in numbers:

Apple Search Ads has proven to be an extremely effective way for promoting your Apps in the highly competitive App Store. It is also much more accessible to all types of developers as it can be incredibly cheap. Apple has reported that %65 of downloads in the App Store come from a direct search result. That means that with Apple Search Ads it is possible to get downloads for as cheap as $1-2.

We strongly suggest our users have a look at Apple Search Ads as it is an irreplaceable tool that will allow your app to boost its rankings and discoverability outside of your campaigns as well. Also, make sure to go to https://www.mobileaction.co/blog/announcing-mobile-action-search-ads-feature/ and have a look on how we can help you further enhance your Search Ads Campaigns.

So that’s all for now. We hope that this introduction was enough to draw your attention to Apple Search. Stay in tune for any new blog posts from us. We will be constantly adding content, most of them contain vital information to improve your Search Ads campaigns.