Overcoming Data Discrepancies – Learn the reasons behind it 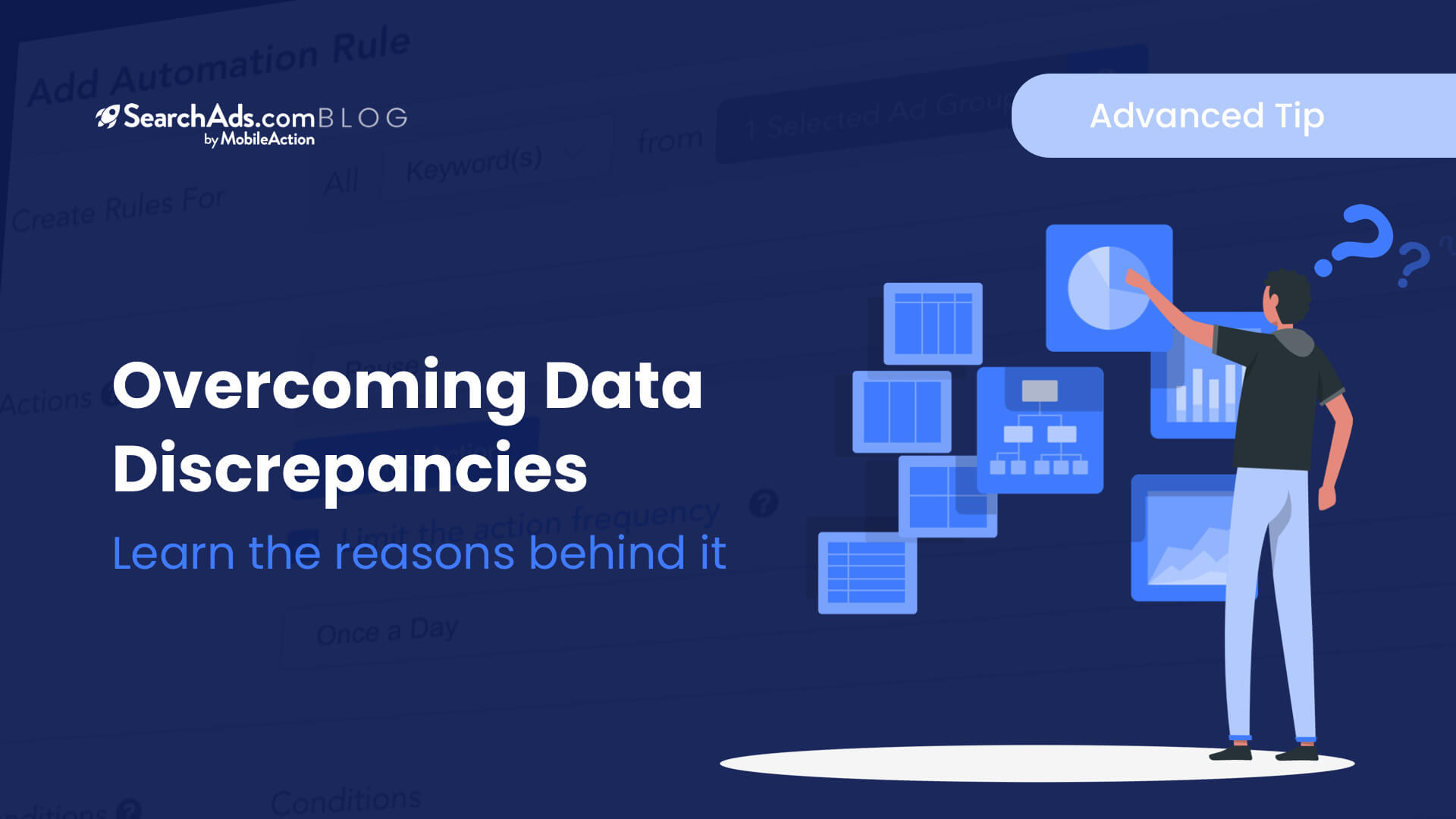 Creating a campaign requires more than market research and tracking your data conscientiously. Every advertiser has faced different matters when it comes to optimization of a campaign; data discrepancies are one of those. They mainly occur due to different approaches that Apple Search Ads and Mobile Measurement Providers (MMP) act towards reporting.

Apple Search Ads and MMP reports act as lodestars for SearchAds.com to become more cost-effective and generate high conversion rates to easily engage with the user. SearchAds.com created strong action strategies and simple solutions to increase the efficiency of any campaign. Those actions and solutions are also offering a way to overcome the data discrepancies that may arise.

In this article, we are going to cover the causes for those data discrepancies and offer alternative ways to overcome those discrepancy problems according to advertisers’ business goals. Before directly jumping to those underlying issues, it is important to understand the term, Limit Ad Tracking (LAT).

What is LAT On?

It allows the user to limit the use of their IDFA (Identifier for Advertisers: Apple’s unique ID assigned to each iOS device) for ads.

It is an optional setting for the user.  By default, this setting comes as LAT Off but the users who are more privacy-conscious have a chance to shift this setting to LAT On.

When a user turns  LAT On, Apple will not be able to share the users’ IDFA with third parties such as an MMP. Those users are able to better protect their privacy while seeing the same number of ads, but the ads may be less relevant.

Recently, Apple Search Ads announced that in 2021 IDFA changes are coming up and with those changes, the number of users who choose to enable privacy settings is expected to increase according to industry peers and SearchAds.com portfolio.

These two disengaged definitions might cause the advertiser to deal with data discrepancies since the users who download the app, does not necessarily need to open the app. Therefore, the total number of installs reported by Apple Search Ads and MMP might differ.

Another reason for data discrepancy again shows up from the different approaches of Apple Search Ads and MMP attributions towards re-downloads. MMP records its number of existing users for a certain period, so that when there is a returning user MMP will not register that user as a new one.

Installs from LAT On users

Among all those factors, the most important factor that causes data discrepancy comes from the installs from users with Limit Ad Tracking (LAT On).

Privacy is one of Apple’s core values. Even though this setting demonstrates howApple places emphasis on the user, the advertiser would need to take this into account. Knowing more about users’ preferences is considered one of the tools that may help advertisers.

According to Apple, LAT On users make up about 30% of the App Store users. This leaves 70% LAT Off users that an MMP attributes to different ad networks. Thus, when you apply age and gender refinements, you automatically exclude customers with LAT turned On. Those customers aren’t sharing that level of detail with Apple Search Ads, even if they’re the exact demo you’re looking to capture. Therefore, LAT On users is considered as an important factor for advertisers to make deliberate decisions and to optimize the overall performance of their campaign. For that reason, advertisers should understand how to recognize data discrepancies between Apple Search Ads and MMP.

How to overcome those data discrepancies and maximize your results?

Depending on the limitations and goals of the campaign, there are two effective approaches – minimize data discrepancies or by work through them.

Advertisers should decide which approach they should be taking according to their different data points. In order to minimize and avoid data discrepancies, advertisers should rely less on estimators so that the measurement of performance and the optimizations will become much easier and trustworthy. This can be achieved through excluding LAT On and returning users from their targeting. (Tip: Avoid narrowing your audience too much.You might overlook interested customers, limiting your impressions and ultimately, your conversions.)

On the other hand, advertisers whose KPIs have already been achieved mainly focus on scaling their acquisitions by working through data discrepancies and understanding them. This approach can be followed through including LAT On and returning users in advertisers targeting. Although this might create difficulty for measuring the optimal performance, by relying more on estimations, the targeted pool of users will increase and scaling the volume of acquisitions will become much easier for the advertisers.

So, how can we measure the performance of LAT On users? How efficient is it to rely on those estimations? Apple Search Ads reports the exact number of users who enable LAT On and LAT Off.  This helps advertisers have more reliable estimations for possible data discrepancies. By eliminating those data discrepancies, the optimal performance of the campaign is likely to be increased.

How to estimate the performance of LAT On users?

As described, Apple Search Ads is considered as a channel that reports the breakdown of installs coming from both LAT On and LAT Off users. There are certain steps to take to make the calculation of total installs:

Step 2: Take the installs and in app-event stats from MMP reports (includes the  LAT Off users’ data by default)

Step 3: Apply LAT On rate to these installs and in-app events to estimate the total number of installs. This simple calculation gives a LAT Coefficient that should be multiplied with in-app conversion data from the MMP report which will result in the estimated number of the campaigns’ performance in Apple Search Ads.

However, there is still a possibility to face data discrepancies after making necessary calculations and finding the total number of installs. This possibility comes from the approach MMP takes towards the users who download the app and not open it. Any additional adjustments are not necessary for such users since they did not open the app, they are not bringing any contributions for the campaign.

SearchAds.com simplified this and created a platform where it can automatically calculate the “LAT On Coefficient” so that the advertiser does not need to apply each calculation separately and saves a lot of time.

It may be inevitable that you’ll end up facing data discrepancies when it comes to the actions taken to optimize the performance of any campaign. In this case, as an advertiser there are some crucial points to take into consideration :

How To Survive in the Finance Category With Low Costs?