Get Started for Free
Start your free trial
Schedule a demo

IDFA Changes Coming Up in 2021: What to expect? How to prepare? 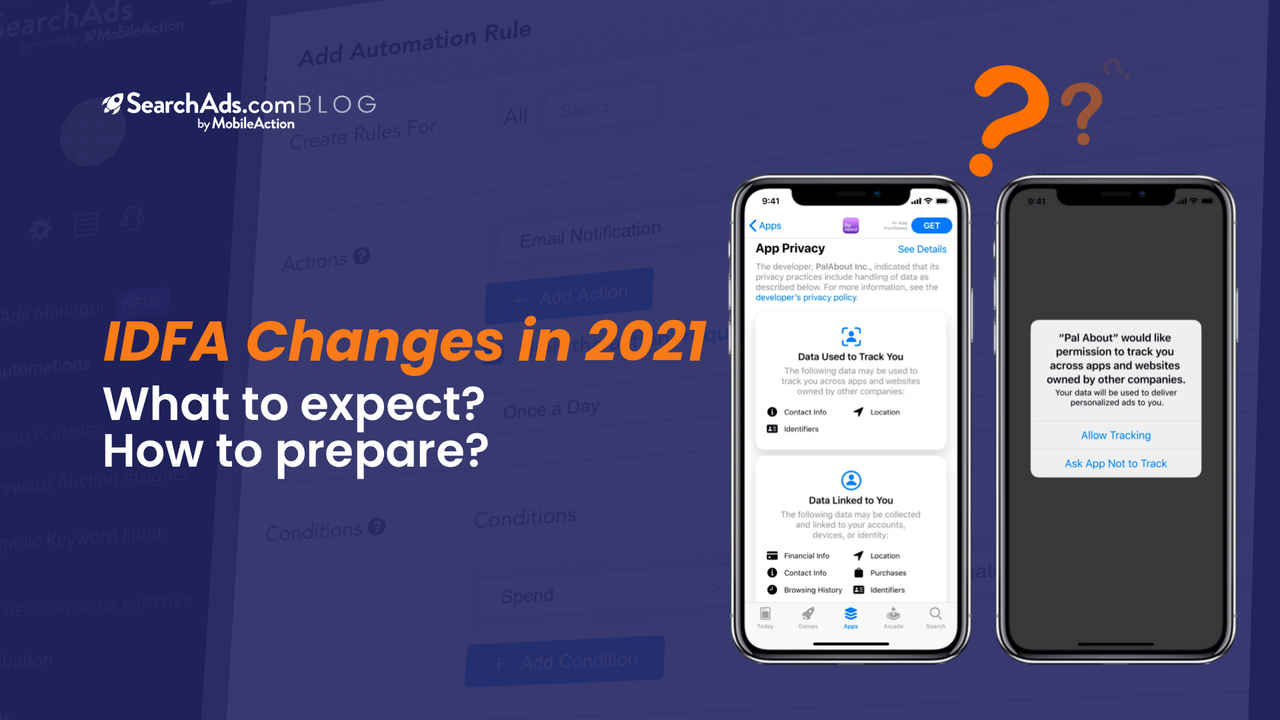 App marketers and AdTech companies have started to talk about the upcoming changes about IDFA after the iOS 14 update that Apple announced at WWDC20 (World Wide Developer Conference) in June. Then, on September 3rd, Apple announced that IDFA changes will be coming up early next year, not with the iOS 14 update. Everyone worries about how to track the data and identify user behavior through certain ads. In this article, we are going to be explaining the IDFA changes, Apple’s and MMP’s solutions for it, and how we are preparing ourselves in detail.

The current ecosystem of IDFA and LAT On Users

First, let me explain what the Identifier for advertisers is. IDFA is a unique identifier of Apple that enables you to get in-app activities data per user per device. With the help of it, app marketers and advertisers have a better understanding of their marketing efforts and how they are resulted in. So they can allocate their marketing budget wisely by considering which channels are effective for them which are not. It basically tracks users’ behavior through their acquisition campaigns from the first tap to any desired in-app event. Then it passes the data gathered to Mobile Measurement Partners.

However, in the current situation, users have a right not to share their in-app activities with the developers by switching the Limit Ad Tracking option on in their device settings.

There are two types of users: Limit Ad Tracking On and Off ones. MMP can easily track the movements of LAT Off users as they allow to be tracked. However, LAT On users’ movements can’t be monitored as their IDFA is not visible. It means that they don’t see any specific ads that are targeted for them. They are hidden under the setting privacy button on your iPhones and iPads. And it takes 4 steps to be found, even some people are not aware of its existence. It is also automatically switched as “LAT On” on devices of people who are under 18. According to SearchAds.com’s client portfolio, the percentage of LAT On users is between 20% and 40% depending on the apps’ category.

What will happen after IDFA changes?

Once users install an app, users’ consent will be asked as a pop-up directly, whether they would like to give permission to be tracked or not. Although it might sound a bit scary, it is a perfect move for the sake of user privacy as people are more sensitive about privacy issues these days.

The percentage of LAT On users will rise up to 85%-90% according to industry peers and our expectations. Back in the old good days before IDFA changes, some User Acquisition Managers used to just ignore the LAT On users. Now, if LAT On conversions will consist of up to 90% of your total ones, can you really keep ignoring them? Don’t think so 🙂 All UA Managers will have no choice but to take them into account after IDFA changes. Yet, the good news is SearchAds.com has some unique solutions to estimate LAT On users with custom column feature.

Since marketers didn’t expect such huge changes that had to be adapted, there are lots of uncertainties that arise in everyone’s head about measuring their marketing performance.

Is IDFA dead? Not really! In the ATT Framework, IDFA can be accessed with the permission of users, so MMP can continue to track the ones allowing it, even if it will be 10%-15% of their users.

What about the rest? In SKAdNetworks, API helps advertisers measure the success of ad campaigns while maintaining privacy. Conversion rates of app install campaigns can be measured with the help of them by advertisers while users have control over their own data.

MMP will be continuing to track users’ behaviors, adopting changes done by Apple so that they will keep monitoring the users through SKAdNetwork by means of estimations.

How to deal with Data Discrepancies with SearchAds.com?

To protect users’ privacy, Apple doesn’t pass on data of LAT On users to 3rd parties. Apple gives data to you that consists of both LAT On and Off. And MMP’s data include LAT off users as they can track them only. At the end of the day, having two different reports creates data discrepancies between Apple Search Ads and MMP. For that reason, LAT On users have always been a pain in the neck for UA Managers. By excluding Lat On users, they are missing out on a considerable portion of the market which would never bring them profit. Instead of doing this, it would be best to find workaround solutions to attribute LAT On conversions.

Apple reports you the breakdown of the ratio of your LAT On and LAT Off users. So you can calculate the On ones. Let’s say LAT On users ratio is 30% and Off ones are 70% with the total installs of 1000:

Since MMP can only track the LAT Off ones, it calculates the installs through it. If 650 users open the app it states 650 installs. If 500 of 650 sign up, it states the sign up through 650 users. Once 325 of 650 starts trial, it shows the trial rate through 650 installs. Assume that LAT On ones perform as Off ones you had taken from MMP data. So the estimation will be:

Lat On users starting the trial = 150

Another reason for data discrepancy is that data you gathered from Apple shows you the install number while MMP only shows the ones that install your app and opens it. From a general perspective of industry peers, 10% to 50% of users download the app and do not open. With the help of our LAT On Coefficient, you can estimate LAT On users that easily and see it on your Ad manager page as a column. If there was not a LAT On Coefficient feature, UA Managers calculating the on ones, would do it manually and adjust their metrics based on this one by one. It would take a lot of time to simply come up with a report. The other feature making your life easier is the custom column that I have mentioned above. Schedule a demo with us to find out how you can solve the discrepancies by SearchAds.com.

Evaluate Your Apple Search Ads Performance with our Free Audit!